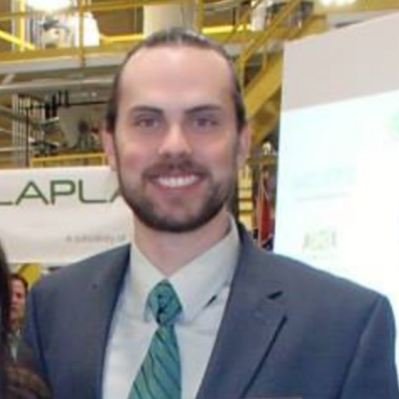 If you’re like most people, you probably don’t associate algae with cutting-edge technology. The thought of algae may call to mind things like pond scum and oceanic dead zones. But, contrary to their lowly reputation, algae are among the most diverse and widespread organisms on the planet, and algae research is fueling some very exciting new research and applications.

Based in Meridian, Mississippi, Algix is one of the companies at the forefront of algae research and commercialization. I spoke with their Director of Research and Development, Ashton Zeller.

Tell me a little bit about what you do at Algix and how you got involved with the company.

ZELLER: I got involved with the company back in 2011 when our co-founders Michael Van Drunen and Ryan Hunt decided to spin-off a business to develop an algae-based plastic. They got a Georgia Research Alliance grant from the state of Georgia in order to pursue that business opportunity. So, with the grant and some assistance from the University of Georgia, they started a research program and hired me to lead the research.

I started out with them at the University of Georgia. Today, our research scope has broadened beyond just trying to demonstrate algae-based plastics to focusing on making specific formulations for different customer applications ‚Äì¬†for example, we have a range of 3D-printer filament. As a company, we¬†focus on algae harvesting, drying, dewatering and collection opportunities because we had to develop our supply chain.

I saw that you have a fish farm in Jamaica. Is that part of the supply chain?

ZELLER: Yes. We acquired that fish farm so that we could have year-round production capability in Jamaica. The long-term goal is to produce fish and produce algae as a byproduct. But we don’t currently operate the farm for algae collection. We’re currently working to stabilize that business for fish production.

What led to the decision to pursue the commercialization of algae-based plastic?

ZELLER: Our chief technology officer, Ryan, came from a bioengineering background and was working on a project at the University of Georgia for making fuels out of algae. They were trying to look at wastewater treatment strategies for algae and trying to produce fuel off that algae, but they were not having a whole lot of success. And what they realized is that it’s really hard to get the algae that produces fuel from competitive strains of algae. They ended up with a lot of protein-rich algae and not a lot of fuel-rich algae. So Ryan, through his relationship with Mike Van Drunen, began working with a professor at UGA to try to make a plastic out of it.

So you can use a broad range of algae species to produce plastics?

ZELLER: Right. That’s really what made our technology successful since we aren’t limited to specific strains or species to create algae-based plastics. The algae fuel industry has been around for a while and people haven’t demonstrated a lot of success in going that route. And that’s mainly because you do need these specific species and strains. But, for us, as long as we are working with areas that have very nutrient-rich waterways, the most beneficial algae for us are also going to be the fastest-growing algae in those environments. The most competitive algae are also, generally speaking, the most protein-rich algae because those proteins help in the process of growing and cell division for those algae.

What’s the basic process for turning algae into plastics?

Our process is based on some very old technology. Before the fall of the Ottoman Empire in World War I and the opening of the Middle East for crude oil production to global markets, most plastics were protein-based. Henry Ford’s door liners for his original Model Ts were all made using soy-based plastic. So proteins have a long history of being used for plastics, but they lost out to cheap and readily available crude oil. That’s largely because the crude oil alternatives outperform algae in the sense that they can be easily processed into a bulk material that can take on a variety of shapes. They also have a lot better elongation characteristics than protein-based materials.

The process for turning a high-protein content material into a plastic uses high heat to denature and elongate the proteins so that, when they cool, they form a solid object that’s a grouping of polymer chains rather than folded proteins next to each other.

We more or less took that old process and figured out how to make it work using modern plastic processing technology so that we could blend the algae-based plastics with more conventional materials and deliver products that are competitive in terms of performance and processing ease in the marketplace.

What types of products are you now producing?

ZELLER: Right now, we have two divisions that we own: We have a product called Bloom for the¬†foam market. In that market, we currently have surfboard traction pads. We’re also looking at, in the near future, to be selling those foams for yoga mats and also shoe insoles and midsoles. Those foams really offer a tremendous improvement in the performance of the material.

The 3D printing market is another opportunity. Currently, 3D printing creates a lot of landfill waste because you’re using plastics for typically short-term applications. The algae filament that we produce offers a significant advantage for that market because it biodegrades much faster. It has a better environmental story and a cool, natural aesthetic that you don’t really get in conventional plastics.

We see huge possibilities for algae in those markets. But we’ve also worked with extruders, injection molders, blown film, cast film, blow molding ‚Äì a very wide range of markets and opportunities for our materials.

How do algae-based plastics compare to traditional plastics in terms of environmental benefits?

ZELLER: Our algae-based plastics that use compostable resin significantly increase the rate of biodegradation. So we have taken materials that could not biodegrade in marine environments and made them marine biodegradable through the addition of algae, which is good for our marine and aquatic environments.

We’ve also shown that the algae can provide a slight nutrient supplementation for agricultural products that need to decompose. So instead of a material just decomposing and providing no benefit to the soil, you have a product that decomposes and provides nitrogen and phosphorus which both enhance plant growth.

In the durable plastic market, we’ve shown significant carbon sequestration and greenhouse gas reductions relative to almost every resin that we’ve compared to our products. In fact, we have not yet put out a resin that doesn’t significantly decrease greenhouse gas emissions. That’s largely due to the algae consuming large amounts of CO2 during its growth cycle and then storing that in the biomass that we are providing to the plastic process.

What about the environmental benefits of harvesting algae?

ZELLER:¬†Algae has been really hitting the news over the last several years. As human populations increase and we pollute our waters with more small molecules that feed algae growth, and as global temperatures increase, we’re creating perfect growth conditions for algae. All around the world, you’re seeing algae take over ecosystems and really get out of control.

Most algae blooms are caused by high levels of nitrates, nitrites or ammonia in water and/or high levels of phosphate. Those are important biomolecules that all plants need in order to grow. Those contaminates typically come from over-fertilization of fields somewhere upstream from where the algae bloom is occurring, but those nutrients may end up in our waterways where they feed algae growth. But if we harvest that algae biomass, we’re basically ending the cycle of those nutrients cycling through that ecosystem because, instead of those nutrients being returned to the water through the breakdown of the algae, the nutrients are removed from that ecosystem with the algae biomass.

We work with local governments and wastewater treatment providers ‚Äì a wide range of people in different areas all over the world ‚Äì¬†to harvest that algae and make use of it. So we, basically, take that ‚Äúpond scum,‚Äù that annoyance to everybody and make it something that’s useful to them, a viable product that has tremendous environmental benefits.

Do algae-based plastics have any performance benefits?

ZELLER:¬†From a material properties standpoint, you do see some benefits. In injection molding, for example, we’ve been able to show reduced cycle times due to quicker hardening of the material in the mold. With foams, we’ve been able to show increased properties like tear strength, elongation of foam materials which extends the life of foams that need to survive several iterations of being compressed, like a shoe insole or a yoga mat.

For our 3D printing markets, we just had a high school student place pretty highly in the Mississippi state science fair using our algae filaments and showing that algae filaments can be stronger than PLA filaments that you can find and buy on the market. In general, algae is not going to enhance the strength of 3D-printed materials, but it is definitely not being scoffed at in terms of the material properties it can deliver combined with the benefits of enhanced biodegradability and low toxicity. So the benefits to using algae are really myriad and situational. It depends on what market you’re talking about, what the potential benefits might be.

How did Algix come to be located in Meridian?

ZELLER:¬†Our company spent a good bit of time acquiring the ability to tap into these algae blooms, these algae problems around the world. When we first started out with our business and first demonstrated that we really could make an algae plastic, one of the biggest problems that we had was the supply chain. There’s just not enough people out there that are growing large enough quantities of algae for you to be competitive in the plastics market. So what we had to do is really develop the supply chain ourselves.

We built our first production facility in Meridian, Mississippi, because of the algae problems faced by American catfish farmers. Catfish farmers introduce nutrients into their ponds every single day in the form of fish feed. Some of those nutrients don’t get consumed by the fish and they just rot in the pond and create algae problems, and those algae problems can be detrimental. At night, algae consumes oxygen rather than creating oxygen because there’s no light for photosynthesis and that can suffocate fish causing massive fish kills if the farmer doesn’t control it. Meridian just happens to be in the center of the majority of the catfish farms in the United States ‚Äì¬†I think about 90 to 95 percent of the catfish farms we were aware of are within a 100 mile radius. Since catfish farms are where we started developing our supply chain and developing our technology, Meridian was an ideal location for us.