How “The HAM” is Taking the Country by Storm: Storytelling’s Modern Creative Genius 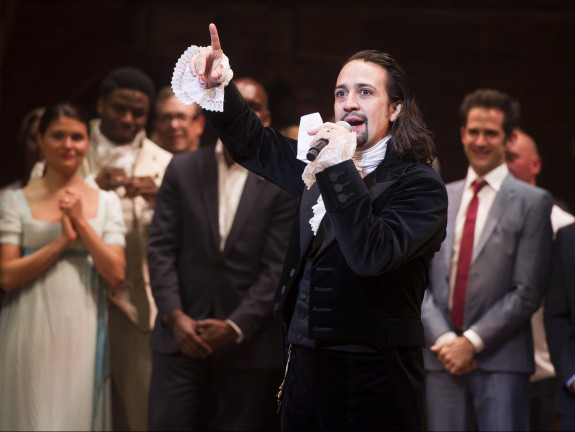 About a year ago, I stumbled across a recording on YouTube of Lin Manuel’s ‚ÄúHamilton Mixtape‚Äù from a May 2009 ‚ÄúEvening of Poetry at the White House.‚Äù Suppress your yawns, for on that innocuous night, poetry got stood on its head in a magnificent way. Truly, it’s pure magic to watch.

In that moment, it was blatantly evident that I was watching someone extraordinary. Who was this Lin Manuel Miranda? This was from 2009 and apparently the Broadway Hamilton production was about to launch. Little would I realize the radiating explosion of Lin Manuel’s Hamilton and what affect it would have on me personally, and on our nation as a whole.

What you may or may not realize is that in the beautiful person of Lin Manuel Miranda we experiencing the privilege of living under the shadow of our very own Shakespeare. For like the bard of old, Miranda speaks the language of the people, and can masterfully corral it into entertainment. Hamilton is relatable, enjoyable, and it makes us think about issues that we, sometimes, are afraid to find the courage to address. Creating such a story takes a person of true genius. Lin Manuel Miranda is undoubtedly such an individual.

Back in 2004, he picked up a book to read on vacation…ok, it’s a tome over 700 pages in length and out of Lin Manuel’s fertile mind this book is rebirthed into a masterpiece in storytelling, modern music. I’m a reader, and avidly purchased the book, which is now, thanks to Miranda, back on the New York Times Bestseller List. I easily laid down my two hamiltons at the bookseller, because I wanted to discover what made this story so great. Understand, Chernow’s 700-page historical biography is not light reading. It is not, to be blunt a Harry Potter book. The story opens with a 93-year old widow tottering about her home: I haven’t made it past page eight.

Yet, this energetic Lin Manuel picks up Ron Chernow’s said epic book and is so inspired by it that the seed of a musical is born. Like Shakespeare, who took dusty history and cut to the quick of humanity’s greatest lessons in a genre his generation loved, so does Miranda. Whether we will admit it or not, Americans love musicals. Disney’s rampant success can be traced in large part to its adopting the musical format for nearly all of its blockbuster animated movies. Disney plucks fairy tales. Lin Manuel Miranda took a controversial Revolutionary War hero and crafted our very own masterful epic on which all the Founding Fathers of our country circle around. Miranda also made Chernow his historian for the musical: giving credit and honor to the man whose work inspired him.

Alexander Hamilton was a lightning rod, in his own right, in his own time. We owe to Secretary Hamilton our three-pronged form of government. We see in Hamilton’s voracious writing his stand against slavery, where he and Thomas Jefferson go head to head over the legality of a national debt.

You can see, in many respects, the beginnings of the Civil War in the conversations of these titans. Lin Manuel illuminates the tensions brilliantly. And, in a day before social media eviscerated a person, Hamilton endured scorching scandals and jaw-droppingly wrote about it, admitting both his complicity and his innocence. Miranda crafts in his Hamilton, a man of such depth, vibrancy, and capacity that we love him, just as the commonplace American people loved him in the flesh.

Or hated him. Hamilton made enemies by the armful. He talked too much. He wrote too much. He wouldn’t back down on his positions. It made him a hero with the populace, but bitterly despised by other holders of power.

Crafting Hamilton in music is one thing. Creating a rap/hip-hop musical allows Miranda to literally smash the mold of the modern musical at a breakneck average of 144 words/minute. Note, musicals typically roll along at an average of 66 wpm. Yet, the songs engage. You find yourself leaning forward, so as not to miss anything. And the breaks in tempo are there in ballads and other classic musical genre.

Lin Manuel Miranda will be leaving the cast of Hamilton after his last show on July 9, 2016. Getting a ticket is nearly impossible. You could take your shot at the lottery Ham4Ham or pay, as a recent search revealed, over $1200 for a single ticket. You can; however, listen to the current Broadway cast sing the entire production for free streaming on Amazon Prime Music.

Guaranteed, Friends, Hamilton is here to stay. It will give you a new appreciation of our founding father, Alexander Hamilton. Beyond the history and snappy songs, it also will leave you with a profound sense of gratitude that you share the same air with the modern master storyteller, Lin Manuel Miranda.