Building the Next Silicon Valley

My friend Joe¬†Stradinger of Edge Theory has often spoken of the idea of a “Silicon Delta.” Tech companies and a knowledge-based workforce in Mississippi. I think we all realize that the way Mississippi can “win the future” is through being highly competitive in the knowledge economy and growing/retaining/attracting more of these leading edge companies. The idea of a “Silicon Delta” is definitely exciting.

As it turns out, the next Silicon Valley may very well grow from, well, another valley: Water Valley, Mississippi. 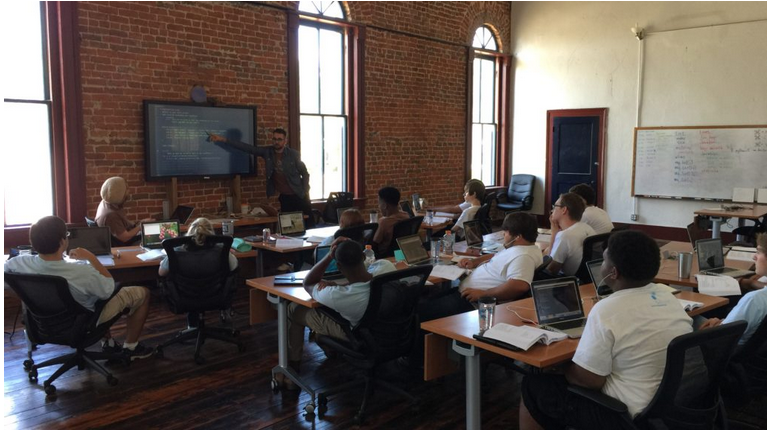 Yesterday, I had the opportunity to visit the Base Camp Coding Academy in Water Valley, Mississippi. The town of Water Valley is quite a story in and of itself. A partnership of private development and city support has lead to a real renaissance in the rural city’s downtown area which has received a fair amount of national publicity. As amazing as the revival has been, I want to talk about a totally new development that really can be a sea change for rural Mississippi and a model for future workforce development.

I walked up the stairs into a rehabbed, row-style brick building in the center of Water Valley’s downtown area. It was built in the 1860s, and the floors are wonderful old hardwood. The character of the space is something that we can no longer duplicate ‚Äì it comes only with the cycle of vibrancy, decline, and rebirth. Inside this building is a large classroom with what have to be 20-foot tall ceilings. A ping-pong table, large flat screen monitors, and whiteboards pay testament to the fact that this old building is a place for new tech.

Fourteen students with 14 laptops sit listening to an instructor giving a working lesson on the Python programming language. This in and of itself is not that remarkable. This same scene is being repeated – albeit in classrooms with less atmosphere – across the country. What is remarkable are three aspects:

Basecamp is the only program of its kind in Mississippi… and it is damn exciting. When we talk about changing the trajectory of this state, breaking community-based cyclic economic challenges, and putting our state ahead of the trending employment curve, it is programs like Base Camp that can play a – if not THE – pivotal role in making that happen. To put it another way, we are looking at a model that will be disruptive, exponentially positive, and a game changer.

The story of how this academy came about is really one that would make Thomas Edison proud. The 1% “inspiration” factor was certainly necessary, but also obvious. The software/tech companies that call Mississippi home – such as C Spire and FNC and others – have a workforce problem. And this problem isn’t unique to Mississippi, either. The U.S. Department of Labor forecasts that by the year 2020 (that’s less than 4 years, folks) the U.S. economy will have the need for 1.4 million “computer science” type jobs. Currently, only about 400,000 students are enrolled in programs or courses of study that would qualify them for these jobs. That’s a one-million job gap.

Why can’t and why shouldn’t Mississippi play a big role is filling this gap? We can certainly help with the dreadful diversity numbers that have plagued Silicon Valley for sometime now. Somewhere around 3% of the workforce are people of color or female. That’s a huge under-representation of the population. And it’s not because Silicon Valley has been exclusionary. Far from it. They WANT diversity in their companies. But they are also not in the workforce development business. That’s where a program like Basecamp comes in. And the 99% perspiration that several dedicated individuals and sponsoring organizations continue to put into making it a reality. They, in all likelihood, are creating a new pipeline to “Silicon Valley” jobs.

Understand that when I talk about “Silicon Valley,” I’m referring to the tech industry, not the place. I’ve been yelling about the “brain drain” in Mississippi for years now. No, it doesn’t do the state any good to develop human capital in the form of highly educated workers, only to have them leave the state. That’s the biggest challenge here, and where we run into the most resistance. To this, I’ll make the following rebuttal:

It really is a perfect combination of demand-side and supply-side economic theory. In-state companies have the need RIGHT NOW for new developers. The more these companies are able to grow based on their talent pool capacity, the more spin-offs, start-ups, and related tech companies will want to call Mississippi home. And they will be much more apt to do so because we are building the capacity to have the SUPPLY of knowledge workers necessary to make these enterprises successful.

The issue has always been that a large swath of Mississippians who are place-bound – either by choice or situation – haven’t had many options for upwardly mobility. The “remote” economy has turned that paradigm on its head. A 20-year-old in Clarksdale can write code of the same quality as someone in Cupertino. The compensation our Clarksdale coder makes will go a lot farther here than in the Bay Area, as well. So there’s incentive to stay. As that person stays and adds to the local economy, additional revenue flows in which can in turn be used to fund infrastructure, education, and other projects necessary to produce an environment that attracts additional commerce.

With this strategy, we may have hit on the secret sauce that snowballs our way out of the economic doldrums.

A project my agency helped to found – Kids Code Mississippi – has partnered with the non-profit Springboard To Opportunities organization to launch a summer-long coding academy for kids living in federally subsidized multifamily housing units across Mississippi. Concurrent with this Cyber Summer program, we recently held¬†”two gen” workshops at two apartment complex locations in Jackson, Mississippi. One was for mothers/daughters, the other for fathers/sons. At each of these events, we had a guest speaker address the young people who were participating. Sheena Allen, founder of Sheena Allen Apps, spoke to the girls’ group. Terence Williams – the only Mississippi-based app developer to be invited by Apple to the 2016 World Wide Developer’s Conference – spoke to the guys.

These are two young Mississippians who are successful and building their businesses in Mississippi, whom I personally admire. The are literally the picture of how Mississippi can become a hotbed in the 21st century knowledge economy. It is an inspiration for our kids to see that people CAN do it, and can do it here. The snowball gets a little larger… 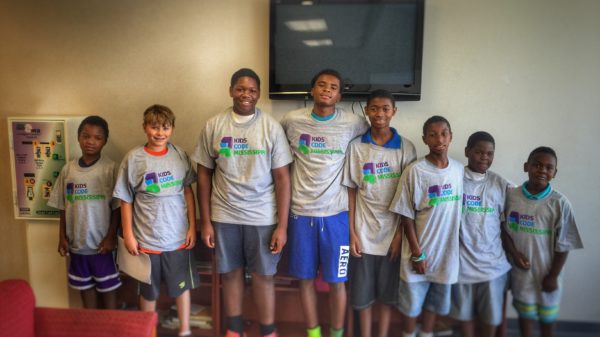 The Base Camp Coding Academy is incredible. It is a life-changing opportunity, and potentially a model for Mississippi leapfrogging other regions in the knowledge economy. Programs like Kids Code Mississippi continue to generate awareness of the opportunity that exists for all Mississippians, and especially among communities who need opportunity the most. To its credit, the Mississippi Department of Education has been aggressive in implementing its CS4MS pilot program to get computer science incorporated into public school curriculum sooner rather than later. It feels like we have a lot of momentum. It feels as if Mississippi isn’t behind the curve, but maybe in some ways actually leading it. Let’s keep it going.

My plea to fellow Mississippians – let the kids who are interested in digital skills know how important what they are doing is for all of us. It is tough for an 18-year-old to grasp the concept that they hold the key to changing the fate of an entire population. We send kids of the same age to foreign lands to protect our freedom. Let’s not diminish the contributions of those who are taking steps to create an economic environment that is growing and vibrant. We’re all in this together, and we’re only as strong as our weakest link. Tired and cliched, but ever so true.