Mitchel Resnick, PhD, is a LEGO Papert Professor of Learning Research and director of the Lifelong Kindergarten Group at MIT Media Lab. His research group developed the “programmable brick” technology that inspired LEGO MindStorms robotics kits. More recently, the group developed Scratch, a popular programming environment for kids. Dr. Resnick received the 2011 McGraw Prize in Education and was listed by Fast Company as one of the 100 Most Creative People in Business.

We spoke about the importance of creative learning, effective strategies for digital literacy, and the impact of initiatives to introduce computer science into more classrooms. 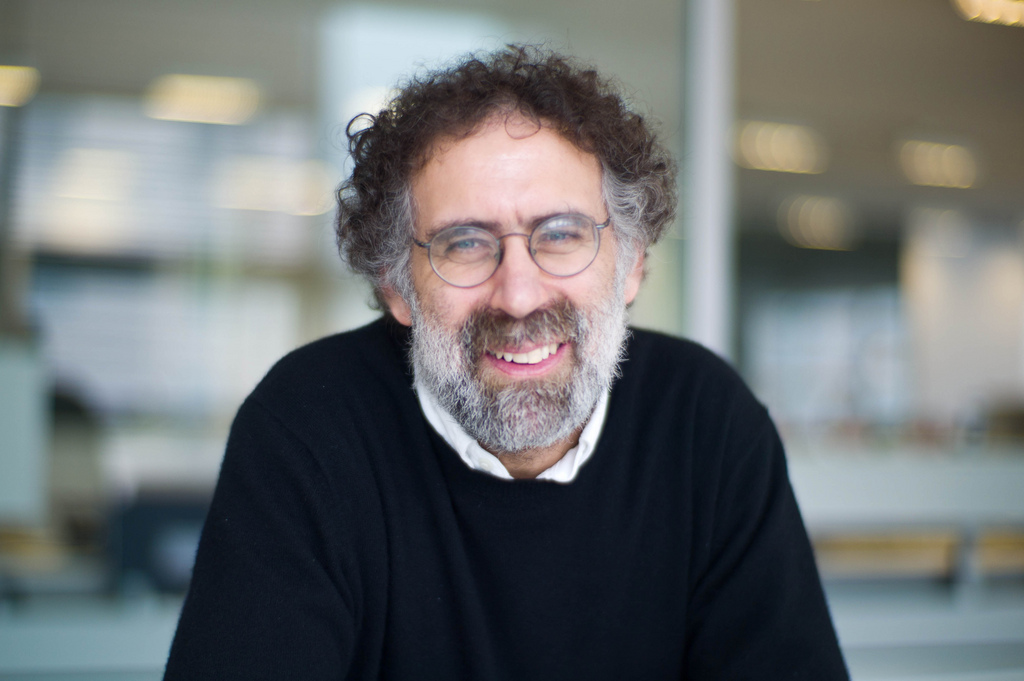 What is the Lifelong Kindergarten Group?

RESNICK: My research group, the Lifelong Kindergarten Group, develops new technologies and new activities to engage people in creative learning experiences. So we help people learn through designing, creating and expressing themselves.

We call the group Lifelong Kindergarten because we’re inspired by the way children learn in kindergarten. In the classic kindergarten, children are constantly designing and creating things in collaboration with one another. They build towers with wooden blocks and make pictures with finger paints‚ and we think they learn a lot in the process.

What we want to do with our new technology and activities is extend that kindergarten approach to learning, to learners of all ages. So everybody can continue to learn in a kindergarten style, but to learn more advanced and sophisticated ideas over time.

I understand there’s a long history at MIT of using computers as a tool for education.

RESNICK: It goes all the way back to the 1960s with Seymour Papert, who started working on the Logo programming language. It was a way for kids to be able to write computer programs to control things. Now, at the time, most people thought it was crazy because computers cost hundreds of thousands of dollars. But Seymour recognized that computers were going to become less expensive and would proliferate throughout the world. So he saw there was an opportunity to use computers as tools for young people and that young people would have access to that technology. He knew that the best experiences would result from not just using computers to deliver information, but letting kids take control of the technology so they could create things.

Seymour would say it’s important that you don’t want the computer programming the child; you want the child programming the computer. You want the child to be in control. So Seymour started these ideas all the way back in the 1960s. His ideas then started to get out into the world when personal computers became available in the late 1970s into the 1980s. The Logo programming language became one of the most popular ways children were using personal computers in schools in the 1980s.

I was deeply influenced by Seymour. He was my most important mentor, and I continue to be inspired by his ideas about children learning by designing and creating things. Our work on LEGO Mindstorms and Scratch were deeply inspired by the ideas from Seymour Papert.

Why is it important to provide kids with opportunities for creative learning?

We live in a world that is changing more rapidly than ever before. Things that you learn today could be obsolete tomorrow. But one thing is for sure: People will confront unexpected situations and unexpected challenges in the future. So what’s going to be most important is for kids to be able to come up with new and innovative solutions to the new challenges that arise. That’s why it’s so important to develop as a creative thinker. Just knowing a fixed set of facts and skills is not enough. The ability to think and act creatively will be the most important ingredient for success in the future.

You’ve spoken about “learning to code‚” versus “coding to learn.” What’s the difference?

But I think there’s a much bigger opportunity. I often make the analogy to learning to write: Some people who are learning to write will become professional journalists or novelists, however most people aren’t going to make a living just through their writing. But we still want everyone to learn to write, because once you learn to write, it lets you organize your thinking, and it helps you express your ideas in new ways. I see it as being the same with coding. Although coding does provide some economic opportunities for jobs and careers, I think the most important reason for learning to code is it lets you organize your ideas and express your ideas.

What kinds of skills does coding teach?

RESNICK: You learn how to organize your ideas. That is, you take complex ideas and break them down into simpler parts: How to identify problems and then‚ debug‚ the problems. How to take the ideas of others and reformulate those ideas to meet your needs. Those are all common things that people do when they’re coding. But those are also common things you do in all types of problem-solving activities and design activities.

Even if you’re doing something that has nothing to do with coding‚ if you’re organizing a birthday party for a friend or developing a new marketing plan for your company‚ you use some of those same ideas. So those approaches, which you can learn through coding, can then be applied to all different kinds of activities both in your personal life and your work life.

Should every child learn to code? Should coding be a school subject like algebra or chemistry?

RESNICK: I do think every child should learn to code, and I would approach it similarly to writing‚ the same way we teach children to write and then let them use their writing in all other courses. You learn to write and then use your writing in writing book reports and writing science reports‚ you use it in all other subjects. And I think similarly, it would be great for all kids to code and then use that knowledge in many other classes.

Events like Hour of Code have raised the visibility of coding and given people an opportunity to get some sense of what coding is all about. But it only will be meaningful if there’s a follow-up and follow-through. If people take that initial spark and turn an hour of code into a day of code or a week of code or a month of code where they continue to explore the possibilities of coding.

So it’s the same thing. If you just spend an hour learning to write, it wouldn’t be so useful. On the other hand, if that sparks your imagination and then you continue to do more things with it, then it becomes meaningful.

How is Scratch changing the way people think about computer programming?

RESNICK: We emphasize that Scratch is a way to express yourself creatively, to express your ideas. It’s also a social activity: You can share your projects with others and learn from what others are doing. Many other organizations that are trying to help people learn to code don’t focus on those ideas. They often are just focused on students learning the concepts of computer science or learning how to solve puzzles with programming.

We take a different approach with Scratch. We see Scratch as an opportunity to express yourself creatively and to work collaboratively. I think it’s really important to have that as a core underpinning for what coding is about. Our ultimate goals with Scratch are to help young people think creatively, reason systematically and work collaboratively. We think those skills are incredibly important in today’s society.

In Mississippi, we have some big challenges relating to education and poverty. Can computer science be a game-changer for us?

RESNICK: I think it’s always dangerous to assume that there’s any one thing that’s going to make a big cultural change. But it could be one element.

Before you can think about changing living standards, you need to change learning standards. I think computer science provides new opportunities to help people become better learners. I think the thing that’s going to guarantee success in the future is people developing as creative thinkers and creative learners. Doing creative work with technology through learning to code is one pathway to that. It’s not the only pathway. But I think what’s probably the most important thing is having young people grow up with opportunities to think and act creatively. That’s the key.

Would you say that computer science can engage students that may otherwise be not that interested in school?

RESNICK: I do think it’s incredibly important to build on young people’s interest. People are going to be most interested in learning when they’re working on things that they really care about. The computer, if it’s used the right way, has the opportunity to engage kids in doing things that they really care about. But I want to add that doesn’t happen automatically. The computer can also be used in a way that kids won’t be interested in.

So it’s not just about using the computer‚ it’s the way in which it’s used.

RESNICK: I agree with you that there’s a challenge. Many teachers don’t have much background in this area. I think further into the future, we’ll get more teachers over time with more expertise. But, for now, I think there are great resources for teachers to learn enough to help young people get started with coding and using computers in creative ways.

I would also encourage schools to support teachers in learning new things so that they can help support these young people‚ and also hiring new teachers who can bring new expertise into the schools. This isn’t going to happen overnight. It’s a long-term process.

How should K-12 schools approach the teaching of computer science?

RESNICK: We should make sure all subjects are taught in a way where kids get a chance to learn through creative expression. And not just computer programming. In a science class or physics class or biology class, teachers should allow students to have creative learning experiences.

e should rethink all school subjects so there are opportunities for children to learn by designing, creating, experimenting and exploring. That’s also true when we use computers. We should use computers to design, create, experiment and explore. But we should apply those ideas to all classes and all media.

RESNICK: Well, it depends on what you mean by “hands-on.” I would emphasize learning by creating and experimenting. If you put your hands on something, and you’re just following the instructions to build a model, then that’s not a very good activity even though your hands are involved. What’s important is to give kids the opportunity to create things and experiment with things, to use their imaginations and to think creatively.

What are your thoughts about getting more women and minority students involved in computer science?

RESNICK: I think that’s linked to what we talked about earlier with supporting people and building on their own interests. Often, in all school subjects, including particularly computer science, you’re taught in one way which might be appealing to some people but not others. We need to make sure we provide multiple pathways into activities.

For example, when we developed Scratch, we made sure that people can use Scratch to do all types of different things. You can make a game, you can make a story, you can make an animation, you can compose music. That’s because different kids have different interests. If we only had computer programming for making games, that would be appealing for some kids and not for others. We wanted to be sure to provide multiple pathways so that kids from all backgrounds and all interests are able to follow their interests and become creative learners.