The year is 2022. The earth is overpopulated. The skies are polluted, the oceans are dying, and food is desperately scarce. For most people, daily sustenance is provided by an affordable plankton-based food called Soylent Green. But there’s a problem. (Spoiler alert!) You see, Soylent Green is people. It’s manufactured using one of the few sources of protein left on our hopeless planet ‚Äì¬†dead human bodies.

That’s the premise behind the 1973 movie, Soylent Green. The movie isn’t remembered for its great storytelling, acting or cinematography. Instead, it’s Charleton Heston’s melodramatic shout, ‚ÄúSoylent Green is people!‚Äù That famous line was ranked as one of the American Film Institute’s 100 top movie quotes. It was even spoofed by Phil Hartman on Saturday Night Live back in 1993.

The topics of human cannibalism, dystopian science fiction and marketing don’t often intersect. That’s why I was intrigued to come across a Kickstarter campaign for a meal-replacement drink named, you guessed it, Soylent. 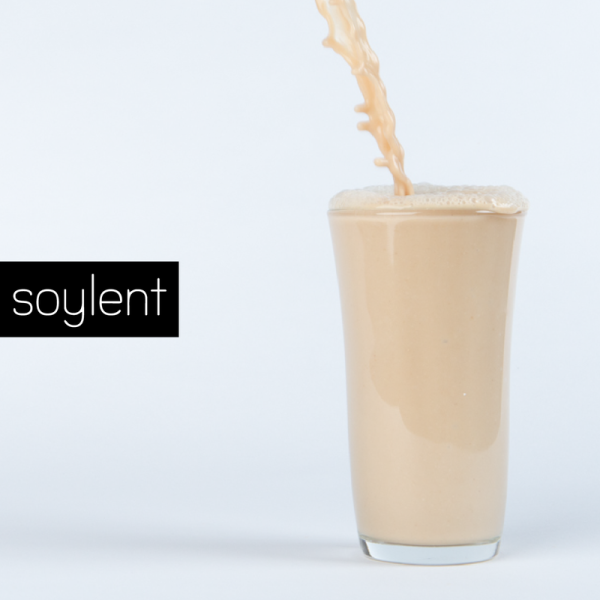 Soylent was conceived by a 24-year old engineer, Rob Rhinehart, from San Francisco. He wanted to create a low-cost alternative to traditional food that would eliminate the time, effort and drudgery of shopping for food, eating and cleaning up. Of course, the product, if widely adopted, would benefit the planet as well. Less food waste. No kitchen fires. No factory farming. The obesity problem solved. The end of global hunger and malnourishment.

I can only imagine what I would have said if Rhinehart had come to me for advice:

Rhinehart: I have this new product I want to market. It’s called Soylent.

Rhinehart: Yes, I know. But my Soylent is 100% human-free. Actually, it’s totally meat-free. And, anyway, I named the product after the book, not the movie.

Me: Yes, but Soylent Green is people!

Rhinehart: I’ve been testing the formula on myself, and I plan to get FDA approval soon.

Me: Soylent Green is people!

Rhinehart: I’ve eaten nothing but Soylent for the past 60 days, and I feel great.

So how has Rhinehart’s Kickstarter campaign been going?

In less than 30 days, Soylent achieved its goal of raising $100,000. Currently, they have more than $1 million in funding from more than 10,000 Kickstarter backers. The Washington Post, The Economist, The Telegraph and Business Week have all covered the story.

So much for conventional wisdom.

That’s the frustrating thing about marketing. It’s never easy to predict the collective behavior of people. Something that sounds ridiculous to you can make perfect sense to a particular audience of people that thinks differently. And, when you’re pitching your product directly to the crowd, rather than through typical mass media channels, boldness often trumps prudence.

If Rob Rhinehart had gone to a product naming company, he would have probably come out of the process with a name like Inspiralite or Nutriyum or Vitaquaff. Not Soylent. Because, Rule #1, you NEVER EVER associate your product name with negative imagery. Like, um, cannibalism.

But in this case, it’s very likely that Rob’s quirky product name is responsible, to a large extent, for his success to date. For the news media, a name like Soylent has a ready-made hook. The story practically writes itself. Publicity is a no-brainer.

With that awareness they’ve gained, Rhinehart and his crew have an opportunity to pitch their product directly to people concerned about issues like hunger, sustainability, obesity, animal rights and so on. With Soylent, these same people can invest just $65 and maybe, just maybe, help alleviate those problems in some small way. Well, that’s the promise, anyway.

Some questions: Now that their startup capital is secure, will Soylent be successful as a commercial product? Will Rob and his team stick with their product name or opt for something without the negative connotations? Will we all forgo breakfast, lunch and dinner and drink Soylent instead so that we never face the grim future portrayed in the movie, Soylent Green?

I won’t even try to guess.