STEM is great, but STEAM is better

Recently, I’ve heard a lot of talk about how important STEM education (science, technology, engineering and mathematics) is to the future of our country, and how our schools need to put more emphasis on those subjects.

Personally, I agree on the need for STEM, but I believe we need to incorporate arts into the mix. Mississippi needs STEAM. (I didn’t come up with the acronym, but I like it.) I’ll get to the STEM/STEAM discussion later. But, first, I want to tell you a story about one of my biggest failures ‚Äì¬†and a later brush with greatness.

Let’s rewind the clock to the early 1980s. A time of bad hair, eight-track tapes and my beloved Apple IIe computer.

My mom had been something of an early adopter of the personal computer. She was never very skilled at using a computer. But she knew that computers were going to be a big deal, and she wanted to give her son the advantage of having one at home.

We bought our first Apple computer from a man my mom met through a friend of a friend. We didn’t think it odd that this man’s showroom was in his basement of his house. But, years later, I did have to wonder if he was really an authorized dealer ‚Äì¬†the serial number on the back of our computer had been filed off. Not a good sign.

Anyway, I loved that computer. And not just the fact that you could stick a 5-1/4 inch floppy disk in it and play Donkey Kong. I liked to program. I’d write simple BASIC language programs that would make my name flash across our amber monochrome CRT. Later, I wrote programs for studying my high school vocabulary words. Yes, I was on my way to becoming a bonafide geek. Ok, here’s the truth: I was a geek before it was cool to be a geek.

So when it came time to go to college, I decided to go to Purdue, where two of my brothers and one of my sisters had gotten their engineering degrees. I planned to enter the new dual-concentration program for electrical and computer engineering since I was pretty decent in math and science. And, although playing guitar was my true love, I knew engineers got good jobs and made good money.

Yes, I thought I was pretty cool. But not cool enough for engineering.

It took me a year and a half of college to come to the realization that I was not at all cut out for engineering. I was actually having a great time at college, thanks to the punk rock band I had joined. But I was failing, literally, as an engineering student.

Fortunately, I had a backup plan. After taking an advertising class as an elective, I was inspired to go into that field and become a copywriter.

Now, 25 years later in the Internet era, technology has become a big part of modern marketing. I feel like I had a bit of a head start thanks to my background. But, the convergence of my interests in art and technology was purely a coincidence. Back in my school days, I viewed science and the arts as mutually exclusive. You were either an artist or a scientist. There was no in between.

Now I know that I was dead wrong. The arts teach creativity, and creativity is the engine that drives innovation. When art and science work together, amazing things happen.

Another flashback. During my college days at Purdue, there was a mechanical engineering professor named Aldo Giorgini. I knew him because his kids, Mass and Flav, played in a punk rock band, Rattail Grenadier. Forget the stereotypes ‚Äì¬†the Giorgini brothers were punk rock entrepreneurs.

Their father, Aldo, was the kind of guy you never forget. You could usually find him at Mass’s club, Spud Zero, when their band played, somewhere in the back of the club by the sound board. He always had a big smile on his face, a fatherly hand on your shoulder and a funny story. I admired him for his loyalty to his sons and his constant support. He was very proud of them¬†despite the unconventional career path they had chosen.

It wasn’t until a few years ago that I discovered that this humble, soft-spoken professor was an accomplished artist, too. He had been formally trained by the Italian futurist Ambrogio Casati and had worked to restore classic works of art that were damaged during World War II. He studied the arts and engineering, together, eventually earning a doctorate in Mechanical Engineering and then, later, traveling to the U.S. as a Fulbright scholar. While in the U.S., he earned his second doctorate, a Ph.D. in Civil Engineering.

During the 1970s, while teaching at Purdue, Aldo rekindled his interest in art and became became a pioneer in the field of computer graphics, using a process he called ‚Äúcomputer aided art.‚Äù Giorgini developed a Fortran program that ran on the University’s mainframe computer that generated his art. He would then print his creations onto Mylar sheets and apply ink by hand. A number of his works are now in the permanent collection of the Smithsonian Institution.

I had no idea.

Regrettably, I never got the opportunity to talk to Aldo about his art before he died in 1994. I have no doubt¬†it would have been a fascinating conversation. 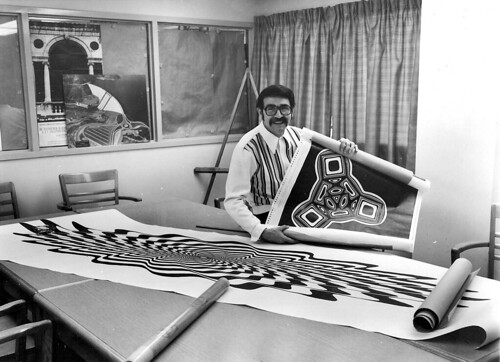 Fortunately, Aldo left us with some words about technology and the arts, which I believe are still very relevant today:

“To be technical and scientific does not preclude a concern for the beauty and art of image and form. Architecture and engineering both occupy the same continuum: mathematics can be beautiful, and shapes can be useful.”

I want to add a few last details about what happened to Aldo’s kids, Mass (bass guitar) and Flav (lead guitar) of Rattail Grenadier:

Mass Giorgini played in a number of respected punk bands throughout the 1990s and went on to become a record producer for bands that have included Rise Against, Anti-Flag and Alkaline Trio. Dr. Flaviano Giorgini is a lecturer in the highly esteemed genetics program at the¬†University of Leicester, in England, where he leads a research group studying neurodegenerative diseases such as Huntington’s Disease and Parkinson’s Disease.

Not too shabby for a couple of punk rockers.